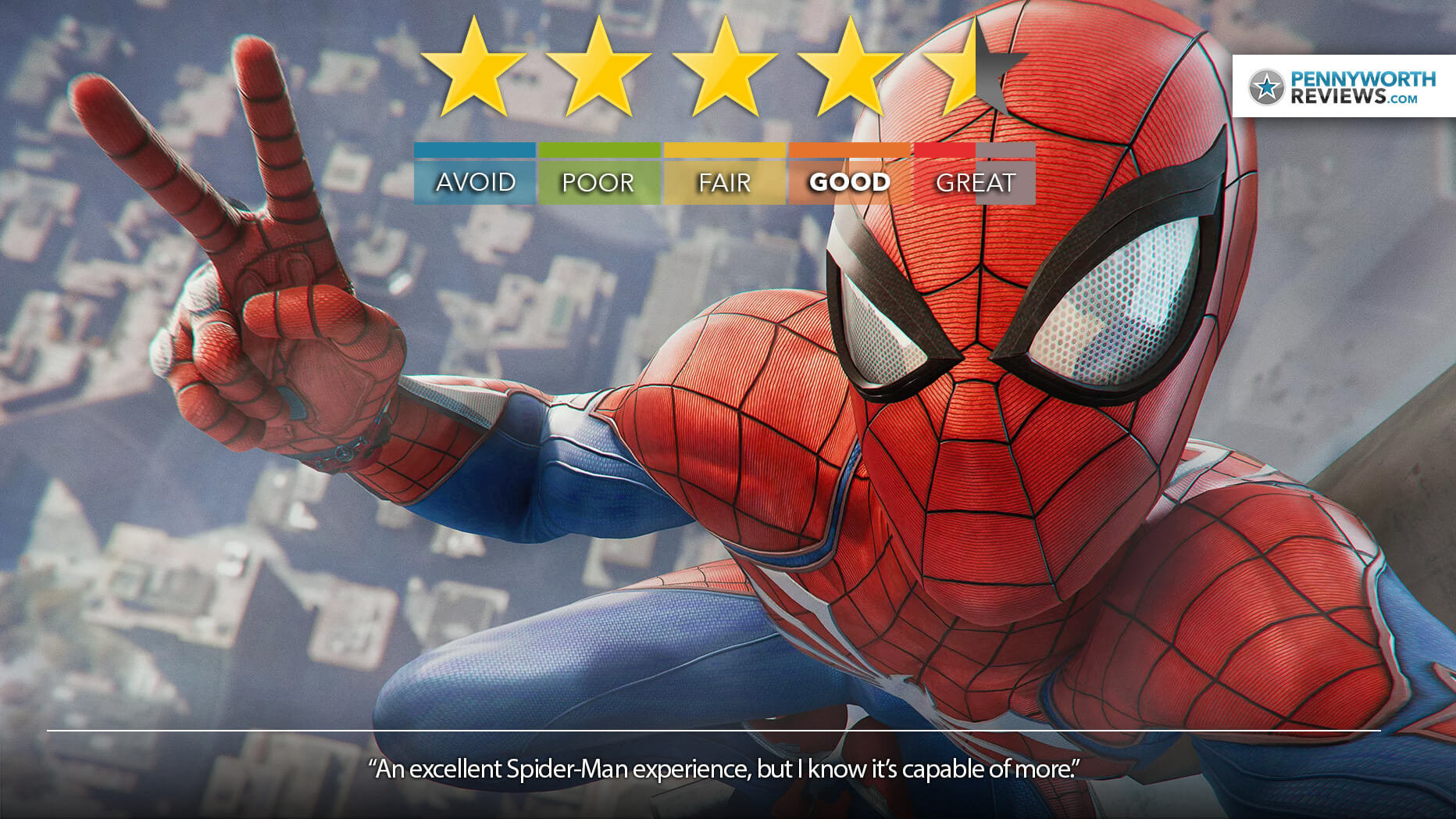 SCORE UPDATE – May 2019: After some consideration and re-experiencing the title we opted to bump the score on Spider-Man from 4.0 to 4.5 Stars. It’s a small bump, but the title deservers that bit more – there’s definitely a large amount of secret sauce in this title. It might have some room for improvement to make it truly great, but it’s still really good as it is (combat difficulty still doesn’t suit it at times though).

What is it? A fresh, huge, open-world Spider-Man game from the folks who made Sunset Overdrive and Resistance. It has nothing to do with the movies and Peter Parker’s already been slinging webs for a few years.  – Reviewed on Playstation Pro.

Verdict: An excellent Spider-Man experience, but I know it’s capable of more.

I’ll admit that I wasn’t actually very sold on this new Spider-Man before I’d played it. I’ve always found Spidey games to be very hit and miss, because the fun of Spider-Man is swinging around, but the combat and story always seemed to suffer as a result. I got tired of Web of Shadows very fast, but quite enjoyed the fresh and focused direction from Shattered Dimensions.

Marvel’s Spider-Man, also known by many as just Spider-Man PS4 still has room for improvement for sure, but undoubtedly delivers the best, most stunning looking Spider-Man game to ever grace a video game system. It needs to immediately be said that Insomniac Games absolutely NAILED the web-swinging and New York city setting, whether you’re launching over Manhattan skyscrapers or walking in the populated streets. Swinging around the game world feels like you’re in the movies, and provides a sense of freedom that is most excellent to say the least. What is a little unfortunate though and maybe a bit sad from Insomniac Games is that they didn’t seem to trust themselves completely, using existing formulas that just feel WAY too familiar at this point, especially to anyone who has played their fair share of open world games lately (Find towers to reveal parts of the map like Assassin’s Creed by aligning 2 frequencies like in Arkham games? C’mon guys). Let is also be said that the combat system is heavily borrowed from – but not nearly as solid – as Arkham games, making it a bit frustrating and even a little too tough even on normal and easy difficulties despite some cool moves and unlockable skills.

“There’s a freshness here that’s so clear at times”

You also get to play as a slightly older and likeable Peter Parker who works in a lab for Dr. Octavius (you some other folks too, but I won’t say more), and the breaks from open-world gameplay keep things fresh, offer some pipe-dream type puzzle solving and give the game the space it needs to deliver great story and character moments that you just can’t get from superheroing all the time. There also also stealth sections when playing as regular people, but they fall pretty flat compared to the rest of the game. Some of the story and accompanying missions get a bit daft at times, and I’m not the biggest fan of the villain looks considering Insomniac had complete freedom to make something unique, but I will say that this is by my favourite Dr. Octavius by far, especially since his place in the story is pretty unexpected.

Spider-Man on PS4 is drop-dead gorgeous, awesome, web-slinging fun and it hits all the checkboxes – a little too much at times though. There’s a freshness here that’s so clear at times, but it’s being held back by too many reused formulas. I’m really quite excited at what a sequel could look like if Insomniac came up with a few really new, unique approaches that I know they are capable of. They came up with a cool photo mode and heck, it’s one of the raddest features in the whole game.