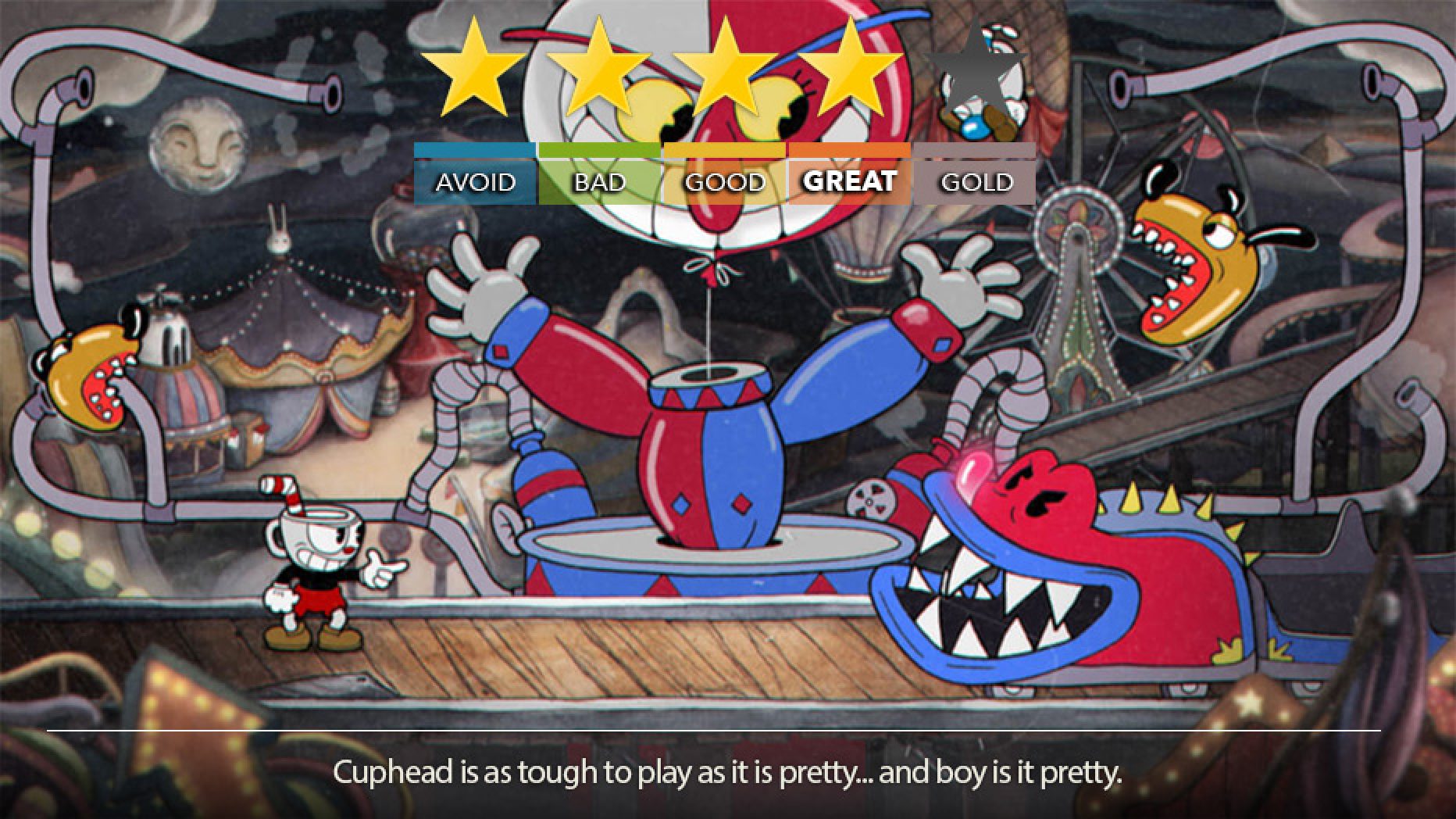 Will the great art style be enough to distract you from all the dying?

What is it? A fun but very challenging 2D Run ‘n Gun that looks like a 1930s Disney cartoon that has you and an optional co-op partner take on a large variety of bosses as well as some platforming levels in order to save Cuphead and Mugman from losing their souls to the devil after they lose a bet in a game of dice  – Reviewed on Xbox One

Verdict: Cuphead is as tough to play as it is pretty… and boy is it pretty.

Just like the the bet in the story that leads to Cuphead’s soul being owed to the devil, Cuphead as a game is itself attractive and tantalising on the surface, but may lead to your becoming a soulless husk of despair if things don’t go your way. That’s not to say that unless you’re a super intense hardcore gamer that you should give it a skip, you just need to know what you’re getting yourself into and once you get into it you may really enjoy what it has to offer.

Drawing its inspiration from 1930s Disney animations, Cuphead is undoubtedly one of the most gorgeous, unique art styles I’ve seen applied to a video game. Its hand-drawn “low definition” look when combined with great music and even the muffled-quality sounds of the announcer at the start of each battle is just sublime in every sense and truly feels like you’re watching but somehow controlling an old cartoon.

The crucial bit of info you need to know is that despite it containing a few platforming and bonus-like levels, Cuphead is essentially (and was originally only) a game that revolves around you and optionally a co-op partner moving around a map and taking on a series of of unique boss-battles in order to progress, while also obtaining and equipping new moves/gear to help you out. The game seemed brutishly difficult at first, until I took the time to realise that its not a game about thinking on the move in the way we’re used to. Instead, just like with boss-battles in the games from our youth, you are expected to try, fail, learn and try again until you’ve mastered each one of the bosses tricks and different forms/phases until you are able to string everything together to get you to the end and kill it before your lives are up. If I have to actually compare to any other gameplay experience, I would say it reminded me of the later expert levels in the Trials motorbike games. It’s actually quite satisfying to have the first phase or two of a boss frustrate you to tears for 15 mins, only to have you cruising through them untouched 15 minutes later as you master the requirements needed to get past and don’t even take a single hit. It’s not for everyone sure, but when you realise that each boss is a full “level” in itself, it becomes a lot easier to play the patience game and spend your time chipping away at each phase until you pull it all off and defeat them… and when you do, man, it feels great. It also makes the game a great go-to option when you have 30 mins to play something.

The gameplay feels quick and responsive, and it needs to be considering what it asks of you and if there’s any issue I had it was that the button layout felt a bit tough to manage when things got tense, but thankfully the game allows you to fully map out your own buttons and once I’d moved my fire button to somewhere where I could pretty much just keep it in the entire time, I was happy.

Cuphead looks great and plays even better, just make sure you understand what you’re getting yourself into.