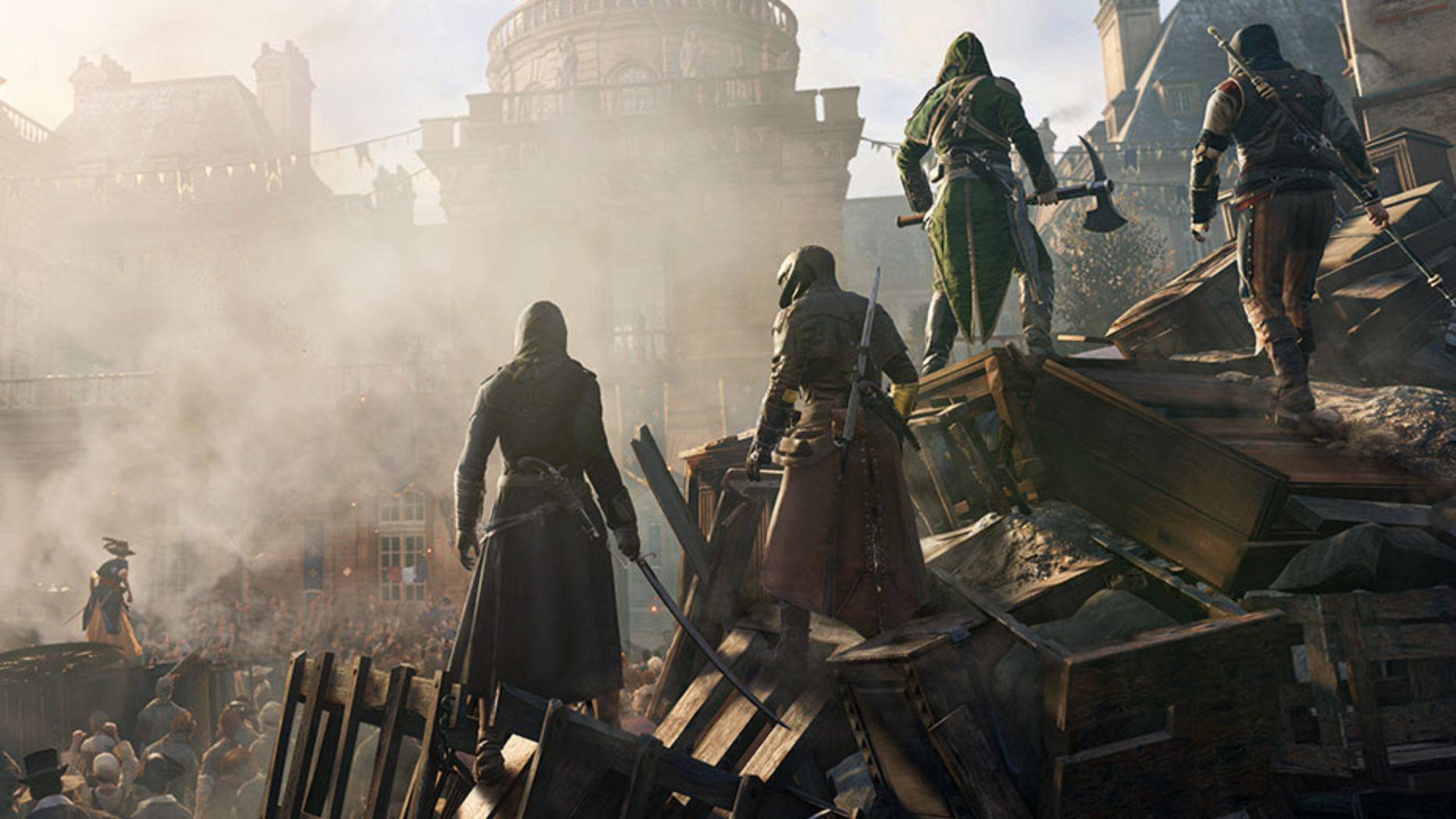 We had some questions prepped, so without further ado let’s take one last look at what Ubisoft have to say about Unity, it’s features, atmosphere and inspirations, before it hits your favourite gaming system.

Pennworth: In Assassin’s Creed Unity, what new feature do you think will get gamers the most excited?

Lesley: Oh, co-op! I think because it’s brand new… it’s something you haven’t done before, you played as an Assassin and now you can play with friends… but to your play style.

So the idea is that you can customise Arno, and you can create a character that really compliments the way that you play, but then when you play with your friends you compliment each other’s play styles as well. So when you play together you are really stronger as a team. I know this first hand, I mean you know it’s a really nice idea, co-op, but until you really get into the game with a co-op partner or multiple co-op partners, you find that you get into this flow, right… and it’s almost like… you know when you get to know someone really well and you start to complete each other’s sentences, it kinda feels a bit like that. You’re on the same page and you’re like “we need to get to this hallway, how are we going to do that”, do you take turns or there’s ways that you are helping each other.

Pennyworth: Why France and the French Revolution?

Lesley: It’s a very important period of history and it influenced all of Western civilisation. It brought democracy and freedom to… it’s very relevant to our world today, there was a huge disparity between rich and poor, the poor rose up against the rich, it escalated into a crazy reign of terror and the reality is that it didn’t happen that long ago. So it’s interesting because a lot of those lessons can still be looked at today and you can go “OK, is this something that’s still relevant today”.

So there’s a lot of relevance to our world today, and of course from a fictional point of view it lends well to the age old struggle between Assassins and Templars and you’ll get to learn more about how that plays into the fiction of the French revolution that we use within the game.

I’d say one film that was very important to us was Perfume. You really get a sense of how stinky and smelly it could be

Pennyworth: Did Ubisoft take any inspiration from stories, books or films that they felt were aligned with their vision of the setting?

Lesley: Yeah we absolutely use all sorts of references. So I mean there’s real life references obviously, people went to Paris directly but we also reviewed films and other types of stories and books, stuff like that. I’d say one film that was very important to us was Perfume. You really get a sense of how stinky and smelly it could be, and so we knew that we wanted to portray certain areas of Paris to that level of disgusting and we love what they did to portray that. We know its still fictional but it really gives you a sense of fantasy.

Pennyworth: Atmosphere is very important in open-world cities, what sort of ideas or elements were included in Unity to capture the Zeitgeist of Paris during the French Revolution?

Lesley: I’d say one of the most important things is the crowds. So we have, thanks to next-gen, we revamped our engine from scratch to really take advantage of next-gen so now we’ve got thousands and thousands of characters on screen, so you really feel the pressure of the revolution from the peasants screaming, stuff like that but then theres also all the different factions. There’s the National Guard, theres the Revolutionaries, these kinds of things kinda happen around you… you don’t necessarily have to get involved, you’re not necessarily the instigator, but because this is the French revolution, because this is how it happened on the streets of Paris, it really is a living, breathing world around you. 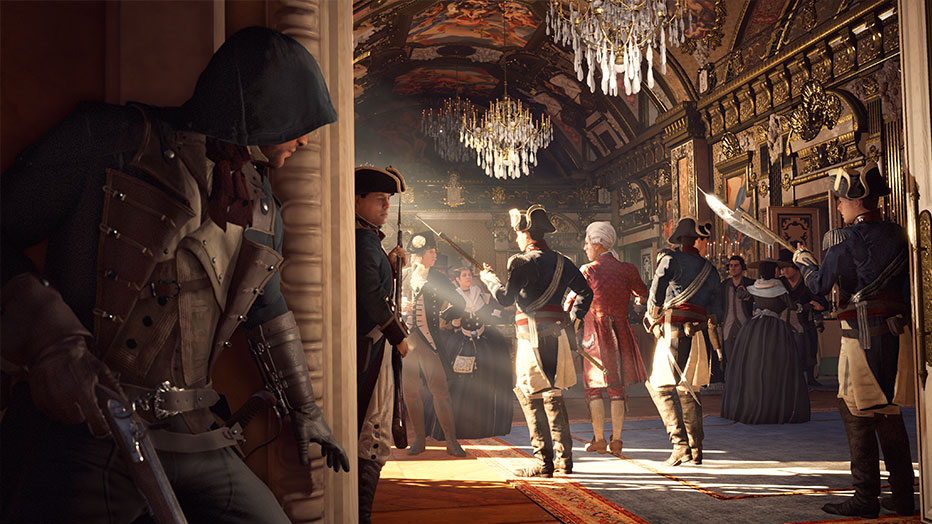 Pennyworth: Will the new movement controls feel immediately familiar, or is there enough of a gap that its going to be a new experience.

Lesley: It will feel familiar… it will take some getting used to for existing AC fans but for example the controls, you go into Parkour using the right trigger, and you press A (Xbox) to go up… the main difference is that you press and hold RT and A to go up and then RT and B to go down.

I think what we’ve seen with AC players is that they’re used to tapping A a lot and so I think holding A is going to be a slight adjustment for them, but its still feels familiar, I mean, what we wanted to do was give players the options and the choices they kinda always wanted. You see this great building you wanna scale and you’re like “Oh wait, I can’t climb here, I have to find another path, I’m not quite sure…”, now everything is a lot more fluid, you have a lot more options. You don’t have to go straight up, you can start going diagonally, pretty much anyway you want so it is very much pick up and play in terms of navigation, but it is a control system that has depth, so in order to become a master at it you do need to practise, but you can master it.

It’s not the only reason its called Unity, its also one of our philosophies

Pennyworth: Is there anything really exciting about Unity that you think has gone under the radar?

Lesley: What I think is really great about what we are doing with Unity compared to previous Assassin’s Creeds is that we are really focusing on player progression. In previous Assassin’s Creeds the single player mission was your driving motivator, to keep moving forward but it was in the context of an open world and when you really think about it, when you are driving to finish a game through a narrative campaign, it kind of works against the open world which is like pulling you out, like “hey explore me, do stuff!” you know, so we wanted to reconcile that kind of thing with Unity which fits well into the name of Unity.

It’s not the only reason its called Unity, its also one of our philosophies, so instead of focusing on a narrative mission to drive your player motivation, its now focused on player progression. So now everything is centered around Arno, we still have a very strong single player narrative, you also have narrative Brotherhood missions that are co-op missions, and then there’s still all those side activities. But now that your focus is more on how do I become that Master Assassin and customise my character the way I wanna play, we feel that that brings those worlds together. So now its really all about playing through all the content and not just through trying to drive to the end of the story.

Pennyworth: What do you personally love about video games?

Lesley: Wow, well I love a lot of things about video games but I’d say one of the things that sticks out to me is I love being in a world that’s doesn’t exist in real life or maybe it did exist but I can’t go there anymore. So I love being in a world that’s been created and it’s really interesting to see the choices the creators have made, why did they decide to put this here, why did they create this crazy world with these people. To me its about living a fantasy and an alternate reality.

We would like to thank Lesley Phord-Toy and Ubisoft for being so kind as to sit and have a chat with us and would also like to give a special thanks to Megarom South Africa for making it all possible.

Assassin’s Creed Unity hits shelves and digital download on November 11, 2014 for Xbox One, Playstation 4 and PC.